If so, you’ll be pretty happy with the recent opening of the Multiball Mania pinball arcade inside the Health Hub Precinct, sandwiched in between City Cave and Fun, Fit, Play.

There are no pinball wizards at WynnumCentral (we only know the song), so we had to seek external advice from people who know about these things, and it turns out that the ‘multiball’ component is important.

For those who know what they’re doing, here’s a list of some of the machines in the arcade…

Interesting factoid: Pinball was illegal in New York City from the 1940s until 1976, because the mayor, Fiorello LaGuardia, thought it unfairly deprived school children of their hard-earned nickels and dimes. 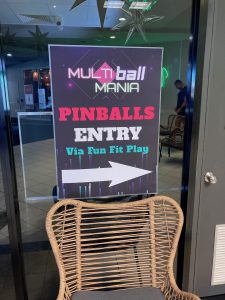 The Health Hub Precinct is a Member of Wynnum Business and supporter of WynnumCentral.

Facemasks are back in again